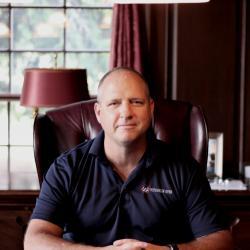 Dave will be remembered at Wisconsin Oven for his steadfast leadership and encouragement of employees. When he took over the position of President and CEO in 2005, he wanted to develop a culture that embraced his employees and motivated them to play like champions every day. Dave created Wisconsin Oven’s Work of Champions program and mission statement to inspire and reward employees for going above and beyond. This championship culture still holds true at Wisconsin Oven today.

During his time at Wisconsin Oven, Dave was dedicated to giving back to East Troy and the surrounding communities. As honorary chairman of the United Way of Walworth County, Dave encouraged businesses to give back during the 2017 holiday giving campaign which resulted in over $15,000 donated. He was also focused on developing the next generation of talent and promoting careers in manufacturing through an annual scholarship to an East Troy High School graduate going into skilled trades or engineering and the creation of the Wisconsin Oven Universal Training Center (WOC-U) in 2018.

The employees of Wisconsin Oven held a retirement party for Dave on June 7th to celebrate his career and contributions to the company. The event was well attended and provided one last Champion chant for the employees to participate in led by Dave.