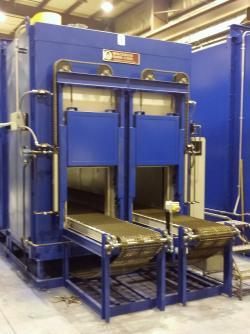 Wisconsin Oven Corporation announced the shipment of a gas fired, two-lane indexing conveyor oven used for preheating sand cores. The sand cores are used in aluminum castings used to manufacture engine parts for the aerospace industry. The indexing conveyor oven replaced an aging oven that could not keep up with the customer’s production requirements. The preheating oven supplied by Wisconsin Oven solved the production issue they were experiencing with extra capacity for future production forecasts (the customer more than doubled their production capability with the new oven) and a much less labor intensive load/unload process than the previous oven. This conveyor oven also provided temperature tolerances that exceeded the customer’s expectations, and resulted in a better quality end product.

The natural gas fired conveyor oven features 500,000 BTU’s and 30,600 CFM of recirculation air. The oven is designed with top-down air flow through the work chamber to deliver the air over the full width and length of the heating chamber. The ductwork is adjustable so it can be set for optimum air flow efficiencies.

“This oven was designed for a dual use per the customer’s request. The customer can also use this two-lane indexing conveyor oven as a batch oven for aluminum aging aerospace parts. The system was proven to a tolerance of greater than ±5°F (±10° F was guaranteed) performed at 550°F with an 18 point survey (9 point survey performed on each conveyor lane) prior to shipment.”  Doug Christiansen, Application Engineer of Wisconsin Oven.

Unique features of this two-lane indexing conveyor oven include: